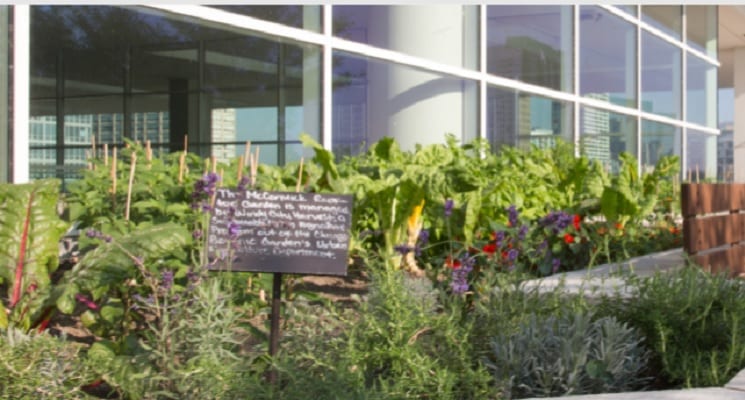 In spring 2020, as the pandemic began to shut down events around the world, SAVOR…Chicago and the Metropolitan Pier Authority, which manages McCormick Square, had a decision to make: whether to proceed with planting the 2020 rooftop garden although it was unclear if large events would return to Chicago in time for the harvest, or to scale back or eliminate this year’s planting.

With no tradeshows currently scheduled during 2020 harvest season, the rooftop farm produce now makes its way to the weekly South Loop Farmers’ Market, with any food that isn’t sold donated to Lawndale’s Hope House, a community-based reentry program. Proceeds from the farmers’ market go to support Windy City Harvest programs and its focus on urban agriculture education and job training to help build a local food system, healthier communities and a greener economy.

Originally conceived as part of the West Building’s L.E.E.D. certification, the one-acre farm atop the West Building of McCormick Place has been grown by SAVOR to embody a commitment to sustainable, community-centered operations that promote sustainable urban agriculture, training opportunities for local residents interested in agricultural careers, and sharing the farm’s bounty with neighbors.

Planning for the 2020 growing season of the rooftop urban farm began well before the coronavirus pandemic temporarily halted most events at McCormick Square. Each year, the one-acre garden atop the West Building produces 8,000 lbs. of fresh produce harvested for use in tasty menu items served to the convention center’s many tradeshow visitors. While that is still the hope for the fall harvest, plans are underway to share the summer abundance with McCormick Square neighbors. 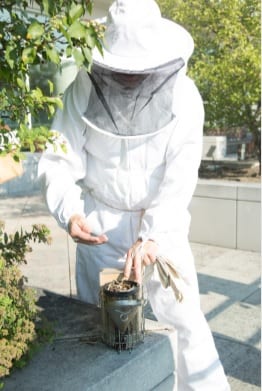 Pivoting to focus on sharing its bounty with neighbors, SAVOR…Chicago and the Chicago Botanic Garden’s Windy City Harvest program planted a one-acre garden bursting with 50+ varieties of vegetables, herbs, edible flowers, perennials, bushes and trees including many grown from heritage seeds selected from the Slow Foods movement Ark of Taste. (The Ark of Taste is an international catalog of endangered heritage foods designed to preserve at risk foods that are sustainably produced and promote biodiversity in the food chain.)

The garden is also home to native prairie plants that are vanishing from Illinois. These native plants provide many benefits including improving air and water quality while
attracting native birds and butterflies.

Since 2013, SAVOR…Chicago has partnered with the Chicago Botanic Garden’s Windy City Harvest program and uses the rooftop farm as a job location for an apprenticeship program graduate and training site for Corps program participants. Dedicated to urban agriculture education and job training to help build a local food system, healthier communities, and a greener economy, the Corps program’s graduates have gone on to work as urban farmers, as growers for specialty microgreen products, and managers in citywide produce companies.

Chicago has changed the course of their rooftop garden from feeding tradeshow attendees in retail locations and catered events to feeding the community.

The McCormick Square campus features McCormick Place – the largest exhibition and meeting facility in North America – which offers 2.6 million square feet of exhibit space, 173 meeting rooms, one of the largest ballrooms in the world, the 1,258-room Hyatt Regency, the new 1,205-room Marriott Marquis Chicago, the 4,249-seat Arie Crown Theater and the 10,387-seat Wintrust Arena. Located on Chicago’s lakefront just minutes from downtown, McCormick Place is owned by the Metropolitan Pier and Exposition Authority and is managed by SMG, a worldwide convention management company. The Illinois Council of The American Institute of Architects (AIA Illinois) named McCormick Square one of Illinois’ 200 Great Places, in honor of the state’s Bicentennial in 2018. For more info, visit mccormicksquarechicago.com

SAVOR is part of ASM Global’s convention center group and SAVOR…Chicago manages the foodservice at McCormick Place and the Wintrust Arena. ASM Global was formed from the merger of AEG Facilities and SMG in October 2019 creating a venue management powerhouse that spans five continents, 14 countries and more than 300 of the world’s most prestigious arenas, stadiums, convention and exhibit centers, and performing arts venues. They pride themselves on preparing and serving exceptional food and beverage whether for intimate VIP experiences or banquet events for over 20,000. Besides great, authentic food, the core elements of their food vision include their partnerships with local growers, producers and community members, their commitment to using antibiotic free meats and poultry, and their dedication to minimizing our impact on the environment through their robust sustainability, recycling and composting programs. For more info, visit  savorchicagomcpl.com