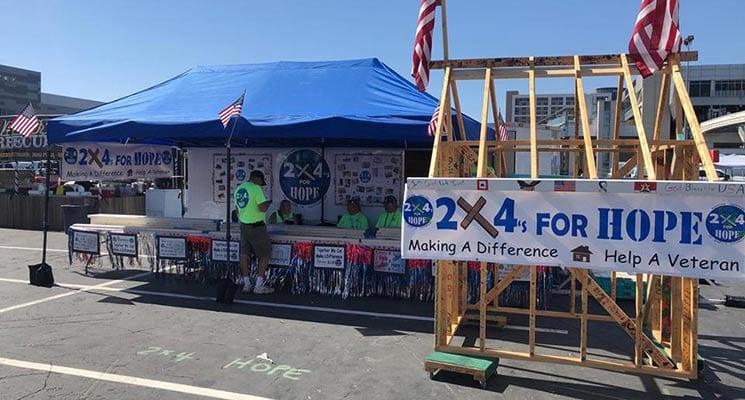 Meetings Give Back to Las Vegas Community

The National Hardware Show, held in Las Vegas May 8-10 this year, partnered with Operation Tiny Home to highlight emerging trends in tiny and container home living and raise awareness about housing instability across the country while helping Las Vegas veterans learn valuable furniture design and construction skills. Operation Tiny Home and Zack Giffin, tiny home specialist and the co-host of FYI’s TV Show Tiny House Nation, led a workshop focused on tiny home furniture design and construction techniques in partnership with Milwaukee Tool. Giffin gave exclusive insight into the tips and tricks of designing and constructing furniture specifically for tiny homes, and offered his perspective on how to save space and maximize functionality. The participants, including local veterans and active duty military, had the opportunity to get hands-on experience with the common tools of furniture making while building custom furniture for a container home that will provide housing support to local homeless veterans during the educational workshop.

National Hardware Show attendees made their mark by supporting 2×4’s for Hope at Operation Tiny Home in the Tailgate, Backyard & BBQ section of the exhibition space. Show attendees were invited to visit 2×4’s for Hope, make a small donation and write their name and message of hope on a piece of lumber to be used to build transitional homes to support the Veterans Village Las Vegas. Since its founding, 2×4’s for Hope has helped build safe, secure shelters for homeless veterans, people affected by natural disasters and others who are dealing with housing instability.

In addition, many of the exhibitors at the National Hardware Show donated supplies and equipment to Opportunity Village. Founded in 1954, Opportunity Village is a not-for-profit organization that serves people in the Southern Nevada community with intellectual disabilities, to enhance their lives and the lives of the families who love them.

These Corporate Social Responsibility activities are becoming an increasingly popular aspect of the nearly 22,000 meetings and events that take place each year in Las Vegas. The Las Vegas Convention and Visitors Authority reported that in 2017, a record-breaking 6.6 million delegates visited Las Vegas. The influx of events and business travelers heading to Las Vegas each year leave a lasting impact on Southern Nevada’s community through CSR initiatives. The LVCVA works with the meeting planners that organize of these events, event participants and local organizations to make connections that will create mutually beneficial opportunities for all groups involved. Initiatives include volunteer activities, donation drives, charitable contributions and even the commitment to provide materials left on the trade show floor following a large-scale event.

The National Automobile Dealers Association held its annual NADA Show at the Las Vegas Convention Center March 23-25 this year and donated $50,000 to the Nellis Support Team, a nonprofit organization whose broad mission includes supporting more than 30,000 airmen and women and their families at Nellis Air Force Base, Creech Air Force Base and the Nevada Test and Training Range in southern Nevada.

“A portion of NADA’s donation will be used to reopen the base’s Auto Skills Center, which was shuttered in 2013 from the U.S. federal budget sequestration that resulted in significant spending cuts,” says Patrick McNaught, a government affairs advocate from Las Vegas who serves as honorary civilian commander of NST. “These funds will be used to renovate the Auto Skills Center—from remodeling the facility, purchasing tools, recertifying the lifts and adding eight service bays and more.” Nellis Air Force Base is located about 10 miles northeast of downtown Las Vegas.

“No one is more inspiring than the men and women in the military,” says Richard Stephens, chairman of the NADA Show committee. “NADA firmly believes in community service and each year contributes to an organization located in the NADA Show’s host city.”

More than 230 college admission professionals from around the country met in Las Vegas July 23-26 last year for “Guiding the Way to Inclusion,” which was sponsored by the National Association for College Admission Counseling. GWI offers enrollment and admission professionals an opportunity to explore issues pertaining to campus diversity and multicultural recruitment and promotes in-depth understanding of college enrollment processes and personal and professional growth. While in Las Vegas the participants worked on a service project to support Clark County students. Workshop participants assembled 500 college kits that are set to be distributed through the United Way of Southern Nevada to local students.

During Alpha Kappa Alpha Sorority’s Biennial Leadership Seminar which took place from July 13-16 last year, the group donated thousands of backpacks filled with school supplies, seasonal wraps, and toiletry items to HELP of Southern Nevada’s Shannon West Homeless Youth Center and Nevada Partnership for Homeless Youth.  Participants also packaged 50,000 meals of donated non-perishable food items for the undernourished around the globe, which are set to be donated to Rise Against Hunger. Serve Our Kids performed 1,908 dance steps for the National Alliance on Mental Health to demonstrate the sorority’s commitment to improve the lives of people with mental illness and dedicated benches in three Southern Nevada parks.

Las Vegas has been named the No. 1 tradeshow destination for 24 consecutive years by Trade Show News Network, and has hosted 47 of the 250 largest shows. In 2017, Las Vegas experienced a record-breaking 42.2 million visitors. The Las Vegas community is very grateful for those who give back to Las Vegas with CSR events.

The Las Vegas Convention and Visitors Authority (LVCVA) is charged with marketing Southern Nevada as a tourism and convention destination worldwide, and also with operating the LVCC and Cashman Center.  With nearly 150,000 hotel rooms in Las Vegas and more than 11 million square feet of meeting and exhibit space citywide, the LVCVA’s mission centers on attracting ever increasing numbers of leisure and business visitors to the area. For more info, visit lvcva.com.