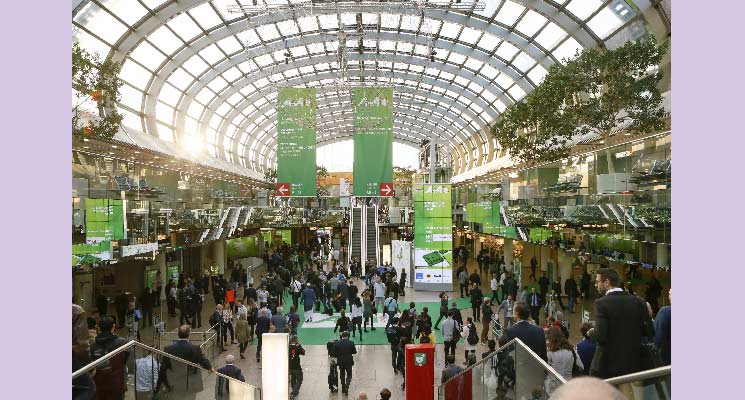 Messe Düsseldorf can already draw a positive balance for the year 2018 before the final balance sheet is drawn up. Due to its usual trade fair cycles, where some events are only held at four-year intervals, fewer trade fairs were held in 2018, yet they were highly successful. Several leading global trade fairs—wire & Tube, EuroCIS, ProWein, CARAVAN SALON and boot (the boat show)—achieved excellent results in terms of both visitors and exhibitors.

The annual GmbH result after tax was approximately €12 million (previous year: €57 million.) Payment of a dividend is again planned for the 2018 financial year. The committees will decide on the final amount in the second quarter of 2019. The results of the GmbH was impacted by a lower number of events under the trade fair cycle as well as by investments in the digital transformation, additional staff for the strong trade fair years 2019 and 2020, the modernization of the exhibition center and the company’s global portfolios.

“The overall revenue was lower due to cyclical fluctuations in the trade fair business. Yet although 2018 had a smaller number of events, we proved our ability to achieve good profits,” says Werner M. Dornscheidt, president and CEO of Messe Düsseldorf GmbH. “This has given us an excellent start for 2019 with its large number of events, including above all K, the world’s biggest trade fair for plastics and rubber. And we are also very much looking forward to the 50th boot Düsseldorf and the 25th ProWein.”

Since 2019 will have more events, Messe Düsseldorf GmbH is expecting a revenue of around €322 million and an after-tax result of about €26 million.

Growth in Existing and New Events

Overall, Messe Düsseldorf GmbH organized 26 events at its own exhibition center in Düsseldorf, Germany (previous year: 29), including 15 of its own and 11 partnership/guest events. The number of exhibitors at their own events rose by 3.1 percent, reaching 22,800 (previous events: 22,112), while the number of visitors increased by 3.6 percent, reaching 1,020,000 (previous events: 984,048).

Dornscheidt says, “Our leading global trade fairs are growing, and we are also developing our own start-ups, which are doing very well indeed. The Print & Digital Convention will be held for the third time this year and is set to grow even further. The same can be said of tasc, the world’s first trade fair in automotive glass, smart repair and car detailing. We’ll be providing even more hall space for the second edition of tasc. Our advantage: we don’t hold generic trade fairs for the industry as a whole, but we offer an enormous spectrum of highly specialized trade fairs for individual sectors, showing how exactly each of them is impacted by digitization and other new developments.”

To ensure long-term success, Messe Düsseldorf particularly focuses on three areas at the same time as developing its portfolio: increasing its internationalization, modernizing the exhibition center and ensuring digital transformation.

With the opening of its new international office in Colombo, Sri Lanka, on Jan. 1, Messe Düsseldorf now has 77 such offices, as well as six international subsidiaries and further international affiliates in 141 countries.

Dornscheidt says, “We are continuing to expand our international activities for a number of reasons. Firstly, we want to meet the demands of the market in an increasingly globalized economy. Secondly, we want to attract more international exhibitors and visitors to our leading global trade fairs at home, in Düsseldorf. And thirdly, we’re aiming to improve our ability to cushion cyclical fluctuations through robust international business. In 2018, we recorded sales increases in China and above all in India, which is a growth market. We are working hard to boost the international share of our net revenue, and our goal is to increase this share from nearly 22 percent at the moment to 25 percent by 2030.”

Overall, the Messe Düsseldorf Group held 58 proprietary and joint events outside Germany. The group is particularly expanding its international business in dynamic future markets with major potential for growth, especially in Africa, South America and the Middle East. This takes place under the umbrella of Düsseldorf’s four major leading global trade fairs: interpack (processing and packaging), MEDICA (health and medical technologies), K (plastics and rubber) and wire & tube (metals and flow technologies.) Of the four new events in 2018, two were held outside Germany. In 2019, the group will be adding six new international trade fairs, including both their own and joint events.

Modernizing the Exhibition Center: A Service Factor for Customers

To stay competitive and attractive for the customers of the future, Messe Düsseldorf continually improves its technology, convenience, amenities and architecture. In autumn 2019, the new southern section, consisting of the south entrance and the new Hall 1, will open. The cost for this project is €140 million—all paid without subsidies.

Digital Transformation: An Investment in the Future

Messe Düsseldorf is one of the world’s most-important platforms for showcasing digital innovations in a wide range of industries. The company itself is also driving the digitization of trade fairs and of its own business. All processes at Messe Düsseldorf are digitized. The company is already selling between 80-90 percent of its space, services, tickets, etc. through digital channels. The latest developments include a completely new online ordering system, modeled on a standard online shop, a Geo data-based site map and a new digital visitor information system with way-finding functions.

With a revenue of around €290 million in 2018, the Messe Düsseldorf Group has maintained its position as one of Germany’s most successful trade fair companies. 26,800 exhibitors presented their products to 1.14 million trade visitors at events in Düsseldorf last year. Compared with previous events, this was an increase in the numbers of both exhibitors and visitors. About 50 trade fairs were held in Düsseldorf, including 23 number one events in five areas of expertise: machinery, plants and equipment, trade and services, medicine and healthcare and lifestyle and beauty as well as leisure. The trade fairs included 22 of their own number-one trade fairs, as well as, currently, 15 partner and guest events. Also, its subsidiary, Düsseldorf Congress, holds around 2,800 conventions, corporate events, conferences and meetings, attracting around 640,000 delegates overall. In addition, the Messe Düsseldorf Group organizes 70 of their own, joint and contracted events in other countries and is one of the leading export platforms in the world. The capital goods trade fairs of Messe Düsseldorf GmbH have an especially high international participation. In 2018, Messe Düsseldorf’s own events in machinery, plants and equipment attracted approximately 77 percent international exhibitors and 70 percent trade visitors from other countries. Overall, Düsseldorf trade fairs were attended by customers from about 180 countries. The group runs a global network of sales offices in 141 countries (with 77 international representations), subsidiaries in six countries as well as several additional international affiliates. For more info, visit https://www.messe-duesseldorf.com/  *All figures are subject to final accounts.