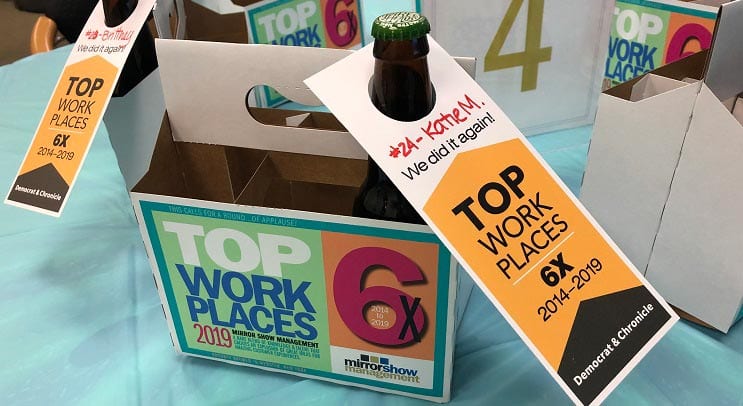 The Democrat & Chronicle partners with Energage, the employee research and consulting firm, to determine the Rochester area’s top workplaces. The confidential survey gives employees the opportunity to rank their employer on 24 factors covering seven areas. The award is based solely on the feedback received through the surveys. In all, 91 organizations completed the survey, yet only 65 scored high enough to earn recognition as a top workplace.

“Becoming a top workplace isn’t something organizations can buy,” says Doug Claffey, chief executive of Energage. “It’s an achievement organizations have to work for.”

MSM had an incredible 94 percent employee response rate to the survey. Based on those responses, MSM earned a spot on the list for the sixth year running, one of only 12 companies in the area that have been named a Top Workplace each year since the award’s inception.

“Being named a Top Workplace is a big deal—I’m so honored, especially because the judges were you, our employees,” MSM President Donna Shultz says. MSM celebrated the news with a company luncheon.

Mirror Show Management is a woman-owned, customer experience agency specializing in tradeshows, events and environments. MSM was the first agency RFP-certified by the Experiential Designers and Producers Association, was named a Top 5 exhibit producer on Exhibitor magazine’s Find It-Top 40 list, resides on Event Marketer’s Fab 50 List of elite exhibit fabrication companies and has been named a Top Workplace each year since the award’s inception. For more info, visit www.mirrorshow.com.