New events venues in Scotland and promotions in Ireland stand to improve the United Kingdom’s standing among international tradeshow destination while a new convention center underway in Berlin could help maintain Germany as the “world’s most popular country.”


The recent Summer Olympics competitions, the film “Brave,” Queen Elizabeth II’s Diamond Jubilee and the 2014 Ryder Cup competition are bringing a great deal of attention to the many attractions Scotland has to offer, but the northern U.K. nation also is flexing its muscle as a tradeshows and exhibitions destination.

Scotland’s Hydro Arena has access from land and sea.

“We have $3.2 billion invested in venues and new facilities, such as the Hydro Arena and the E.I.C.C. (Edinburgh International Conference Centre),”said Richard Knight, marketing manager, VisitScotland. “We are doing wonderfully. Scotland is one of only three countries that did not see a dip in tourism during the recession.”

A “Winning Years” marketing strategy by VisitScotland aims to boost tourism to Scotland by 50 percent by 2015 with a great deal of help from many large, international events in addition to domestic tourism promotions, such as the 2014 “homecoming” beckoning all people of Scottish descent to return to the land of the Scots no matter where they reside now.

“Our business numbers are going up,” said Knight, adding that numbers should continue improving with many international events slated. “We have the Commonwealth Games, the British Open and the homecoming for all Scots in 2014. We are calling on all people of Scottish descent to come back home for a visit.”

Scotland has several suitable facilities for putting on exhibitions, tradeshows, conventions, meetings and other events, including convention centers in Aberdeen, Dundee, Edinburgh and Glasgow.

The Aberdeen Exhibition and Conference Centre has hosted events for the past 25 years and annually averages more than 300,000 visitors. Among the about 300 events held at the center every year is the biennial Offshore Europe energy show, which is one of the largest of its kind anywhere. The Offshore Europe show in 2011 occupied more than 141,000 square feet of space among 1,800 exhibitors and handled over 48,000 visitors.

In Dundee, the West Park Conference and Events Centre offers more than 200 suites and a 300-seat auditorium and Victorian mansion with 15 rooms for meetings and events. Rail lines and the local airport are five minutes from the conference center, which provides first-class food and catering services for meetings and events and uses locally grown foods as much as possible when creating menus.

The EICC first opened in 1995 and recently completed a more than 6,000-square-foot addition called the Lennox Suite. The 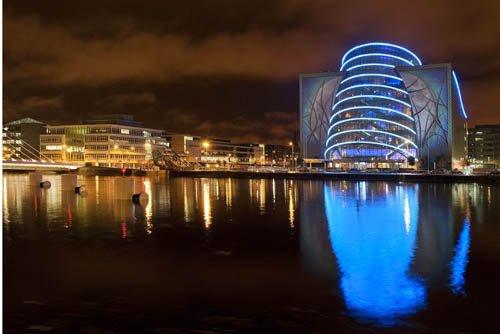 center is owned by the City of Edinburgh Council and operates as an independent business entity that has hosted nearly one million visitors to more than 2,600 events since its 1995 opening. For the third time, the facility won recognition as the “Best U.K. Conference Center” by the Meetings & Incentive Travel magazine.

Soon to open on the Scottish Exhibition and Conference Centre’s grounds is the “Scottish Hydro Arena,” which is a state-of-the-art entertainment and sports venue whose construction is almost completed and will seat 12,000. The Hydro is slated to open in September. Construction began in 2009, and the energy firm Scottish Hydro has pledged nearly $2.5 million per year for the first 10 years to the facility to be used toward operational and maintenance costs. The netball and gymnastics events of the 2014 Commonwealth Games are scheduled to be played in the Hydro.

In nearby Ireland, The Emerald Isle has begun a major international push to attract more conferences to Ireland after enlisting the endorsement of Prime Minister Enda Kenny.

Ireland’s “Conference Ambassador Programme” provides the first point of contact for  international event organizers with a dedicated team on hand to assist in making introductions and providing practical assistance within the destination. The program is overseen by officials with the nation’s official tourism-development authority, Fáilte Ireland.

“Our ‘Ambassador Programme’ is bringing real results – delivering business and benefits to assist this country’s economic recovery,” said John Concannon, director of marketing, Fáilte Ireland. “Since the start of the program in 2009, our dedicated research team has identified and motivated 447 ‘Conference Ambassadors’ to bid for future conferences with the potential to bring in conferences worth €430 million to the Irish economy.”

While officials in Ireland and Scotland are looking to boost their nations’ respective status among international tradeshow destinations, a new venue in Berlin could help maintain the nation’s status as the most popular in the world as indicated by respondents to a recent poll conducted by the U.K.-based BBC World Service.

Rendering of the CityCube Berlin project

The proposed CityCube Berlin project is underway in Germany’s capital city, which recently celebrated a roof-topping event at the site located on the Berlin Exhibition Grounds. Scheduled to open in March 2014, the facility will hold up to 11,000 in the multi-purpose hall.

“Booking levels are already high for events in 2014 and numerous bookings have already been taken for the years to follow,” said Raimund Hosch, CEO, Messe Berlin. “We can justifiably say that even before its completion, the CityCube Berlin has taken up its position on the market for national and international events.”

Despite being under construction, the facility already is mostly booked for 2014 and could elevate Messe Berlin’s position among most popular international tradeshow destinations.

“We are proud that Berlin is now among the world’s top three international congress venues,” said Cornelia Yzer, Berlin senator for economics, research and technology. “Completion of the ultra-modern CityCube means that we are well-equipped to meet the challenges of the future and are able to compete on level terms with many other major cities around the world and their trade fair and congress venues.”

Whether looking to participate in international tradeshows and exhibitions in the United Kingdom or Germany, there are many new venues and promotions underway designed to enhance the experience and likelihood of success for all involved.