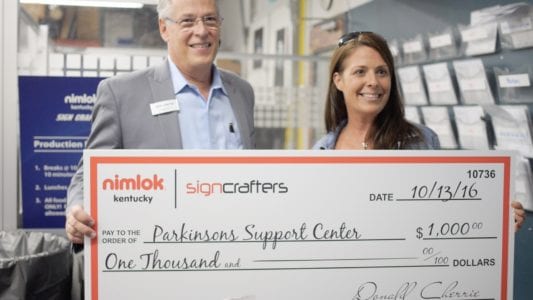 Nimlok Kentucky, an exclusive and expert Nimlok exhibit and display distributor based in Louisville, KY, is proud to announce that a recent open house event raised $1,000 for the Parkinson Support Center of Kentuckiana.

“We are firm believers in giving back to this great community,” said Don Cherrie, president of Nimlok Kentucky. “This event was a great way to give back while reconnecting and celebrating achievements from this past year.”

Nimlok Kentucky holds open house networking events semi-annually to connect with partners and valued customers, and has raised over $7,000 for various local charities since 2013.

“As a local charity that is 100% driven by donations, we are always looking for ways to spread our message and connect to the community,” said Bobbi Cain, development coordinator of Parkinson Support Center of Kentuckiana. “Nimlok Kentucky’s open house event was a wonderful way to spread our message. We are so appreciative of their support.”

“As a neuropsychologist treating individuals with cognitive dysfunction and also as a son of a father with Parkinson’s, I see both the clinical and personal dimensions of this disease,” said Parkinson Support Center’s Board President Dr. Robert Underwood. “This is a wonderful organization with dedicated staff who are greatly impacting the lives of those affected with Parkinson’s in the Kentucky and southern Indiana communities.”