Pandemics had limited to no impact on tradeshows during the 20th century.  In 2020, COVID crippled the convention community, especially in states with more stringent lockdowns.  Did this make sense?

The worst pandemic of the 20th century was the Spanish Flu of 1918-20.  It killed an estimated 675,000 people in the U.S. at a time when the population was less than one-third of what it is today. Masking, hygiene, social distancing, quarantine and field hospitals were all commonplace measures. During that time, events and shows continued to occur with limited, or no, apparent negative impact. (Auto shows rolled into New York, Detroit and Chicago; National Restaurant opened in 1919. The World Series average attendance in 1918 was 21,41; 29,359 in 1919; and 25,508 in 1920—compare that with the highest World Series attendance in 2020 of 11,472).

The Asian Flu killed 116,000 between 1956-58, but this did not deter conventions or convention center construction: the LVCC opened in 1959, and McCormick Place opened in 1960; both halls precipitated the move from hotels to centers and larger shows.  The Hong Kong Flu killed 100,000 in 1968, but tradeshows continued to increase in size and number during the ’60s and ’70s. AIDS has killed about 700,000 in the U.S. since 1981; the numbers peaked in the mid-’90s with more than 40,000 a year, but had no impact on conventions. Tradeshows steadily increased in size and number each quarter from 1976 through the second quarter of 2001 (when comparing metrics with the same quarter the previous year). SARS in 2002, and MERS in 2012 made headlines, but were not deadly (a total of 1,659 deaths).  The swine flu in 2009 killed about 575,000 worldwide that year, and approximately 12,500 in the U.S.  None of these diseases impacted tradeshows.

Then came the 2019 novel coronavirus outbreak, better known as COVID-19.  The disease, coupled with government mandated shutdowns, had a devastating effect on the convention and event industry. Did the lockdowns curtail the disease?  How do per-capita deaths compare, state-by-state? Is there a correlation between the lockdowns and the percentage of deaths?

Below is a chart detailing the deaths per 1,000 population in various states (all data as of, June 13).  The average across the country is slightly higher than 1.8 COVID-related deaths per every 1,000 people.  The highest number, almost three people per every thousand, occurred in the Northeast.  (Two convention states with the longest lockdowns are highlighted in red; the major convention state with the shortest lock down time-frame is in green). 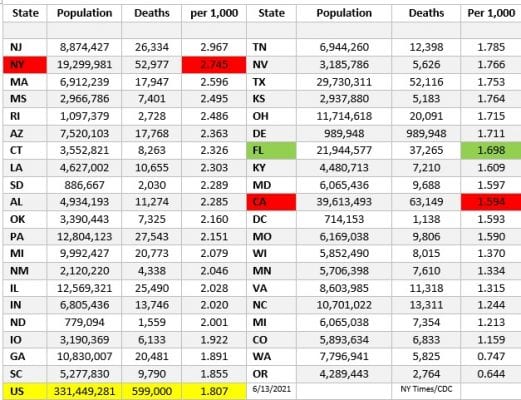 California was the first state to issue a “stay-at-home” order; they did it March 19, 2020.  Illinois and New Jersey followed, issuing orders on March 21, then New York did so one day later, on March 22.  Both New York and California lifted restriction’s June 15, 2021.

California may have been the first state to have a show close due to COVID (NPEW, March 4). California, to my knowledge, was the first major convention state to close a venue (Moscone’s doors were shuttered on March 19). California began easing restrictions April 7, 2021, with the initial goal of lifting most restrictions by June 15.  Anaheim will be hosting events in July, and shows in August. San Diego and Moscone will open for shows in September. The Javits Center, in New York, will host shows in August.

Florida closed doors on April 3, 2020; the state began opening up to sporting events, tradeshows, and other meetings in mid-July that same year. The OCCC hosted more htan 60 events in nine months (plus restaurants, bars, and beaches were open to one degree or another).

Based on the above chart, California fared better than Florida in COVID percentile deaths, but not by much—for every one million in population, an extra 104 people died in Florida compared with California.  And Florida did much better than N.Y., Mass. or N.J.—states with much more stringent lockdowns policies. Deaths per million in New York, for example, were 162 percent higher than deaths in Florida. For every one million in population, 1,047 more people in New York state died compared with Florida. (Not just conventions have been impacted. In Mass., over one-third of all restaurants closed during the pandemic; it is unknown how many of those businesses may re-open.  In Mass., the first indoor tradeshow will be in late July.)

To date, COVID has killed fewer people in the U.S. than did the Spanish Flu. The reasons for this could be many: possibly the disease is less deadly; possibly it was caught earlier; possibly the initial lockdowns helped; possibly current-day masks are more efficient; probably, it’s a combination of the above and other reasons. One thing is for certain: medical technology and care today is significantly better than 100 years ago.