Q & A with Kevin Camden at Camden Tradeshow & Event Furnishings 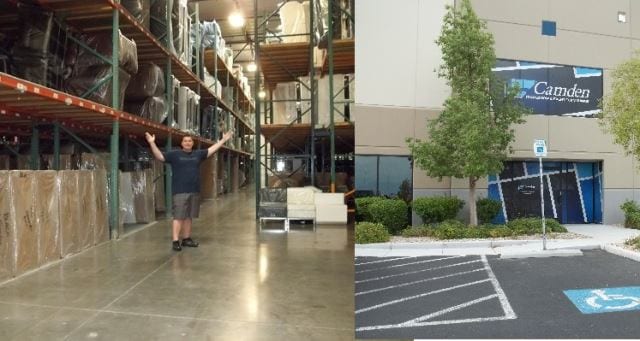 Arthur Bloberger’s last day of work (September 8) was spent interviewing Kevin Camden, owner of Camden Tradeshow & Event Furnishings. We enjoyed getting to know Kevin and seeing his beautiful warehouse with clean, ready-for-rental inventory (it was all so organized!) We thank him for his patience; transcribing the tape took quite a while.

AB:         Let’s start with your background and how you got involved in the tradeshow industry.

Kevin:    Well, I started in the furniture industry in Las Vegas selling used furniture at a clearance center here for Globe Furniture. Back in the late ‘90s, Globe was purchased by Cort Furniture so I went into the commercial side of sales with Cort Furniture. Did that for a couple of years, then had an opportunity to get into the convention/tradeshow business with Brooke Furniture–so I was there for a couple of years with Brooke Furniture–got to meet a lot of interesting people, a lot of general contractors. Brooke ended up closing their tradeshow division after three years and I landed with a local competitor here and was general manager there for several years before venturing out on my own and opening my own shop here.

Kevin:   Well, I love the tradeshow business–I love the fast pace. It’s like no other. I saw the different opportunities to help exhibitors from a local standpoint of providing the needs that they had coming in from out of state. It’s something different every show, every day. That was definitely attractive to me–the flexibility. You work a lot of hours but I like the flexibility.

AB:         Did you come right into this facility or were you somewhere else first?

Kevin:   Oh, no, we started out in a 400-square-foot garage–like a storage shed/unit. Had multiple of those and ended up moving into the foreign trade zone–taking some space over there–just raw warehouse space, no office. Worked out of there for a year or so, building up inventory. At that point, we moved into our own warehouse on Arville and worked there for six years and just outgrew it. It seems like you can never have enough space. You keep racking up things on the shelves and before you know it, you need more space. We ended up making a move over to this location about a year and a half ago, and I hope this is our last move.

Kevin:   It’s a major undertaking taking all the furniture and racking and trying to time it in between a busy schedule–all the shows coming in and out.

Kevin:  We have three full time guys who are with us all the time and we have part-time guys–we could have anywhere from six to 14 part time guys depending on what the show is and what time of the year it is and stuff like that. But the larger the show, the more spread out or the more condensed the shows are, the more part time and freelance people we bring in to help us out.

Kevin:   Yeah, we have certain shows we only have one or two booths on. There’s other shows that we’ll have 30 or 40 booths on with five or six trailers of furniture. We don’t discriminate at all against the size of the show or where it is. Small opportunities do turn into big ones. We’ve seen it.

Kevin:   Right now, we’re going to hit that busy time for the fall–it’ll be G2E coming up, and we’ve got ICSE (International Council of Shopping Centers), the Los Angeles Deal Making will come up the end of this month (September) and it goes right into NBAA (the Aviation Show) and then IMEX is coming in—I think it moved here about four or five years ago from Chicago. It’s been a great show for us. Towards the end of the year, you’ve got the SEMA/AAPEX and before you know, people are already starting to call for CES. We’re already starting to deal with CES stuff for January 2018.

AB:         What percentage of your business is exhibitors?

Kevin:   I’d say about 65-70 percent is exhibit house business and about 30-35 percent is direct, end user exhibitor coming direct to us for show furniture and requirements that they have.

Kevin:   Oh, I like dealing with both of them. I definitely like having a balance between both of them. The exhibit houses are more long-term relationships–they’re people that you have in your life off the show floor as well, you’re friends with them, you keep in contact with them, you see them on Facebook, you see them at different things. Those relationships are nice but it’s also nice to have a mixture of some direct exhibitors who come back to repeat year after year–those people move in their marketing jobs and it seems like they have an opportunity to come back to us from a different location or different place they’re working at it, so it’s nice to see that happen as well.

Kevin:   Yes, they had worked for me at a different company in the past. We’re small but you become very close. I’ve known Bernado since he was about 14-15 years old and now he’s about 28-29, married with two kids. You watch them grow from not even having a driver’s license to having his own house and family. That’s one of the rewarding parts of ownership in a small business, you get to see someone like that grow.

AB:         Let’s get to some of the challenges, but you were talking about him and his family. Are you married with children?

Kevin:   Nope, not married, no children but I do have a long-term girlfriend and it seems to work like that so there’s no reason to make a change. She’s a manager of a financial institution here in town, she’s weekend support and knows when we’re busy and going to have long hours and she’ll bring dinner over. She’ll come over and hang out with us.

Kevin:   I’m originally from a little town called Mexico, Missouri. We’re about 20 miles off of 70 between St. Louis and Columbia–on the way to the Lakes of the Ozarks. I moved out here in 1984 when I was 10 years old when we moved out West. My father was a director for the gas company, so we moved to Phoenix, Apple Valley/High Desert in California, been here the longest–we’ve been here since 1994, so this is home now.

Kevin:   My mom was a histologist at St. Rose/Sunrise Hospital and she just retired last month. In July, they moved down to the Villages in Florida, right outside of Orlando.

AB:         So, let’s do challenges–what are some of the biggest challenges you face in day-to-day operations?

Kevin:   Well, the logistics of inbound and outbound are some of the more challenging aspects of tradeshows. It takes time to get things in and out and oftentimes exhibitors don’t understand that. They show up and expect things to be ready to roll and don’t have a full grasp of the process of what you go through after you order something–going through the marshalling process, getting the paperwork done, going through dispatch, getting in line and waiting for a forklift operator… Dealing with people who don’t know exactly how the tradeshow industry works and having to slow down and take the time to educate them is probably one of the challenges that we deal with on a regular basis.

JB:          What sets you apart from other furniture rental companies?

Kevin:   We prep our product after it comes back in from use, this way if it’s been at a show in rental, when it comes back in, we have a download area that we put the furniture in and the guys will go through and prep each individual piece and take the time to repair it, to touch it up and clean it, before we bag it and put it back on the shelves. Once it’s bagged and put back on the shelves we know that it’s in rentable condition and can be used again. That’s how we’re able to keep control of our inventory and know immediately how much product we have and how much is available when we’re allocating pieces for multiple shows that are going on simultaneously.

We had worked other places where the furniture would come back in and they’d just push it back on the shelves and as you’re counting inventory–and you have an exact number of chairs you need and there’s an exact number on the shelves–but you didn’t know if they were in rentable condition. Here, we pride ourselves on having everything in like new condition–if something’s not in good enough condition that I would use it, then we don’t send it out to an exhibitor. That’s one thing, knock on wood, we’ve never had issues with. We’ve never had clients call and say that our furniture is beat up or tore up. We bag things on the front end, because a lot of what we have is white and white gets dirty so easy, so we coach exhibitors to keep the furniture wrapped in plastic as close to show opening as they can to minimize I&D personnel from using it as a lunch table and getting it dirty before the show opens.

Camden Tradeshow & Event Furnishings is a provider of rental furniture for the tradeshow & event industry, with their corporate office based in Las Vegas, NV. It is our mission to provide a variety of exceptional furniture rental solutions for your next convention, tradeshow, meeting or special event. Our inventory of seating, tables, lounge settings & lighting includes the newest trends in the industry. They are located at 716 Indian Garden St, Las Vegas, NV 89138. Phone: (702) 474-4877 For more info, visit www.camdentradeshow.com