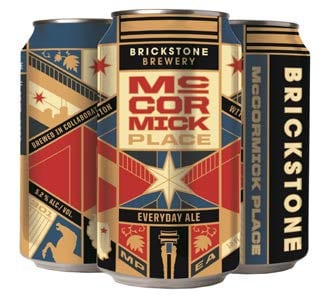 Brewed including hops grown in the rooftop garden atop McCormick Place’s West Building, McCormick Place Everyday Ale is a refreshing Session Ale with a light malt backbone and hopped with Citra, Amarillo and Cascade hops. It is the country’s first branded ale brewed for a convention center using locally-sourced ingredients.

The thirst-quenching ale is the result of SAVOR…Chicago working with local BrickStone Brewery to create a McCormick Place-branded brew that uses hops grown in McCormick Place’s rooftop garden. McCormick Place Everyday Ale is available in both cans and on tap, only in select McCormick Square and BrickStone locations. The Ale will be launched during the 2017 Chicago Auto Show and be available throughout the year.

“For many visitors coming to Chicago for a trade show, McCormick Place may be the spot where they spend most of their time. We want to introduce these visitors to the region’s many wonderful makers, brewers, and bakers,” explained Doug Bradley, SAVOR…Chicago vice president of culinary. “This local partnership is a great way for us to support the Illinois region and produce a flavorful, uniquely Chicago brew.”

“From the start of this project in talks last year, it was a great experience to work with SAVOR… to develop a product that best portrays BrickStone & McCormick Place as a team. From the beer development to the can design, we had a great time working together. We hope every guest gets a chance to try McCormick Place Every Day Ale and enjoys drinking it as much as we enjoyed brewing it,” Tommy Vasilakis, one of BrickStone’s founders and brewers.

BrickStone Brewery first opened its doors in 2006 and started with a 5-barrel brewing system. Today, BrickStone is well known for its diverse selection of award-winning beers, including 2012 GABF gold medal and 2012 World Beer Cup bronze medal APA and 2013 GABF gold medal Belgo APA. They are located in Bourbonnais, Illinois.

SAVOR, a leader in convention center catering, concessions and special events, took over McCormick Place foodservice operations September 28, 2011. SAVOR is part of SMG, the largest public facilities management company in the world, including McCormick Place as of August 1, 2011. SAVOR is also an industry leader in introducing green standards and programs to public facilities. As the food and beverage provider to facilities with some of the most stringent environmental 0policies in the world, they have researched the matter extensively and work closely with community and facility managers to develop environmentally friendly operations focused on minimizing carbon footprint by purchasing locally produced, sustainably raised product, using non-petroleum-based packaging and recycling or composting waste whenever possible.

The McCormick Square campus features McCormick Place — the largest exhibition and meeting facility in North America — which offers 2.6 million square feet of exhibit space, 173 meeting rooms, one of the largest ballrooms in the world and the 4,249-seat Arie Crown Theater. Located on Chicago’s lakefront just minutes from downtown, McCormick Place is owned the Metropolitan Pier and Exposition Authority and is managed by SMG, a worldwide convention management company. In the fall of 2017, these existing facilities will be joined by the 10,000-seat Wintrust Arena and the 1,205-room Marriott Marquis Chicago. For more information, please visit www.mccormickplace.com.