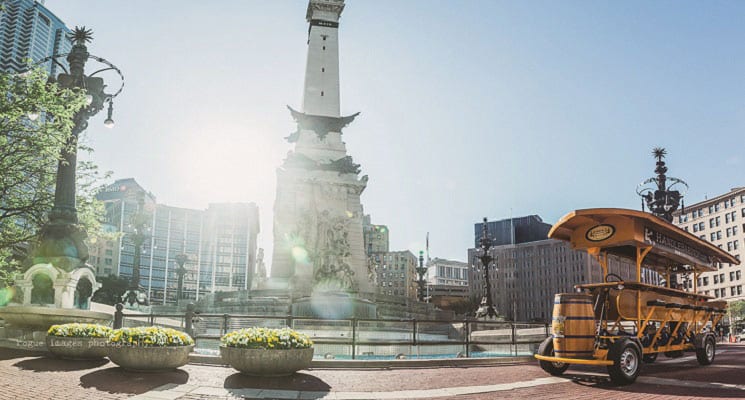 From Home-Grown Brews to the HandleBar Pedal Pub, Indy is Party-Ready!

From the bright lights of downtown to the boho-chic of Broad Ripple and Fountain Square, Indy is party-ready any night of the week. You’d think it was a “college-town” and, actually, there are 20+ colleges within about an hour’s drive of downtown Indy—including Purdue, DePauw, Indiana University, Butler, etc.

With home-grown breweries all over town, it’s hard to get a bad beer in Indy. Most pubs and bars stock the local brews and there are also a few dedicated brewpubs where the barman may also be the brewer. One such establishment is the Black Acre Brewing Company, an Irvington with reclaimed-wood walls, a blackboard scrawled with information about the beers and a rustic atmosphere. Having started as home-brewers, they offer unique seasonal ales, along with their regular brews. For real ale lovers, it’s bliss.

But for an experience completely out of the ordinary—there’s the HandleBar, a pedal pub that allows riders to bring their own drinks with them and enables them to get their exercise outdoors, socialize with fellow pedalers and see the city in a very unique way. And new for 2018–all beer bikes are now electric-assist, specifically designed to help out as much or as little as you want. Individuals can book a two-hour single seat for just $25, but they specialize in group, corporate and teambuilding events. Each beer bike holds 16 people and group rates start at just $300.

“It’s like renting a private VIP room that moves past skyscrapers and every iconic attraction downtown,” according to their sales pitch for corporate teambuilding events. “We’re like a giant picnic table riding through the city, so our bike bar tours provide an EASY and “required” opportunity for everyone to interact with one another. Plus, you DO have to pedal together to move. A perfect example of our pedal pub tours promoting team communication and engaging all members of the office happens most frequently when the bike bars are stopped at a red light. Pay attention when the light turns green, someone always gets called out for not pedaling quick enough! Some friendly finger pointing is almost always bound to happen if someone isn’t pulling their weight.  That said, we do have an electric pedal assist on each bike to help if you’d like it!

Brothers Stephen and Brian Lindsay started The HandleBar in 2012 with a pretty simple goal: Bring a new outdoor experience to the city that brings people together, pay off their investment and learn a little about running a small business along the way. After three years of working just nights/weekends, they both graduated with degrees in mechanical engineering, and decided to go fulltime with HandleBar.

The pedal pub was invented about 20 years ago by two brothers in the Netherlands (the world headquarters of bicyles) who were asked to make a float for the Queen’s Day Parade by a friend who owned a bar. His request was they make a “bicycle bar” that would combine beer and biking. After the parade it was such a hit, they started renting it and thus began the pedal pub!

The HandleBar bikes are still made in the Netherlands by those inventive brothers, Henk and Zwier Van Laar. And the HandleBar is proud to say that they’ve made design improvement suggestions to the clutch system that have already been implemented to the bikes that are shipping worldwide.

“There is no better way to take in the city than in the open air, on a HandleBar bike bar, with friends and coworkers!” according to the owners of HandleBar, explaining, “The slow pace allows you to look around and see all the new developments happening downtown at your leisure while you play your own music and talk to each other.  If you have questions during the tour, we love to talk about the city too, so just ask. Remember, our bike bar tours typically consist of 20 minutes of cruising followed by 20 minutes of resting at a landmark or bar/restaurant, so there is tons of time to chat about what you saw during the pedaling or after, while we’re stopped.”