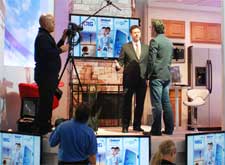 The Reliant exhibit, which came in just under $500,000, was designed by Mike Fosbenner of Lynch Exhibits, Burlington, NJ.

“This show is going very well for us considering how little time we had to prepare for CES,” said Stephen Morisseau, director of public relations for Reliant Energy, an NRG Energy company. “This is our first time showing at CES and we only had about eight weeks to pull it together.”

Although not a typical venue for a regional energy provider, Morisseau said attending CES was about building greater brand awareness. With several thousand media representatives in attendance this year, attending CES can’t hurt.

Located in the electric car zone of the North Hall, Reliant Energy’s 20 X 40 exhibit showcased a three-level, smart energy home accompanied by a presentation, “A Day in the Life of Smart Energy”. The presentation followed a couple throughout the day and highlighted how they use energy efficiently. The company also had a 10 X 10 booth in the “Connected Home” zone in the South Hall to drive traffic to its main exhibit.

The exhibit, which came in just under $500,000 was designed by Mike Fosbenner of Lynch Exhibits, Burlington, NJ. Walt Rich, senior account manager for Lynch, said there was nothing “really exotic” about the Reliant Energy exhibit, but it was effective nonetheless. The exhibit is comprised of standard deck construction and deep frame walls for internal cabling, audio and lighting management. It has a small theater area, five demo stations with Apple iPads, five 40” flat screen televisions and a 60” flat screen television positioned on the chimney. Unique to the exhibit is its motorized garage door that was simulated using lightweight, yet durable window shade fabric.

Morisseau equates the exhibit’s success to its prime location in the electric vehicle zone of the South Hall and Lynch Exhibits.

“The greatest value that the Lynch team offered was that they got it, they understood what we wanted to achieve,” said Morisseau. “They have given us a tremendous turn key solution for this show.”

Next stop for the Reliant Energy Exhibit, the Houston Livestock Show, March 1-20. 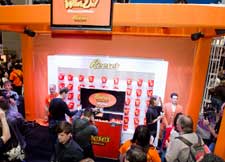 Reese took the show by storm with its simulated candy box and a count down to the big unveiling on the first day of the show.

Reese Peanut Butter Cups
One of the oddest launches at CES was The Hershey Company’s unveiling of its Reese’s Minis. Billed as the next big little thing, Reese’s Minis peanut butter cups made CES history as the first candy to be introduced at CES and as CES’s first “official” candy.

Prominently positioned in the Las Vegas Convention Center’s (LVCC) Grand Lobby between the North and Central halls was the 10 X 30 Reese’s Minis exhibit, a simple set up comprised of 11-foot high, orange fabric-covered trusses and some strategically placed Reese’s candy-branded shipping cases; full of candy naturally. Despite its simple design, the Reese exhibit was a tremendous hit among attendees who received bags of Reese Minis.

Taking a page from some of the top Silicon Valley product launches, Reese took the show by storm with its simulated Reese candy box and a count down to the big unveiling on the first day of the show. With the help of a countdown clock and a spotlight, a fabricated Reese’s branded candy box was lifted to reveal the exhibit which showcased a dime-size Reese’s peanut butter cup on a pedestal.

So why unveil a candy at CES?

“We wanted to make a candy that was ergonomically good for one-handed Internet surfing, emailing or texting,” said Jim St. John, vice president North American Chocolate Product Development for the Hershey Company. “It had to be convenient, it had to be small and it had to be unwrapped, but still the perfect pairing of peanut butter and chocolate. Since CES is all about innovations and making things smaller, this was a natural venue for unveiling Reese’s Minis.”

Like Reliant Energy, The Hershey Company also saw value in the number of people and press attending CES. Media found the Reese exhibit odd for CES and gave it a lot of attention.

Along with a sampling of its eco-friendly, electric cars, Audi brought with it a 50 X 70 auto show-styled exhibit that was well received by attendees.

Audi
Following its best fourth quarter sales in Audi of America’s history, Audi also stormed onto CES 2011’s worldwide stage for the first time this year. Earlier in the week, Audi announced all-time record U.S. sales of 101,629 vehicles sold in 2010, surpassing the prior record of 93,506 vehicles sold in 2007.

Along with a sampling of its eco-friendly, electric cars, Audi brought with it a 50 X 70 auto show-styled exhibit that was well received by attendees. The exhibit screamed “come see me”, without overshadowing the automobiles on display. A half-dome ceiling of high performance/technical Rentex fabric projected down an almost blinding florescent light while highly polished white flooring bounced the light back upward. The effect showcased the Audi automobiles’ every nook and cranny.

The only other fixtures in the exhibit were a pedestal showcasing dashboard technological innovations and a small seating area. Audi representatives were not forthcoming with any additional information on the booth, only that it was a wooden structure covered in fabric. Audi’s exhibit was designed by tisch 13 of Munich, Germany.

“The design of our booth is somewhat futuristic,” said Joseph Schlomacher, press relations spokesperson for Audi, Ingolstadt, Germany. “It focuses on the autos we want to show. We get the maximum concentration of light onto our cars. White is a color we use for most of our exhibition concepts.”

Audi exhibits at more than 100 expositions a year, so why CES? According to Audi chairman Rupert Stadler, the most innovative and exciting mobile technologies can be found in cars.

“These technologies have the potential to change the way we drive, making you safer in every driving situation,” said Stadler.