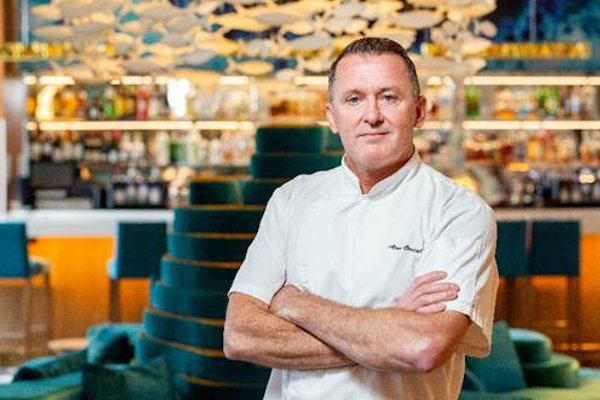 Atlantis Paradise Island in The Bahamas announces Chef Alan Orreal is vice president of culinary. Chef Orreal is the most recent executive appointment to the resort’s culinary team. Chef Orreal is responsible for the operation of Atlantis‘ 40 restaurants, bars and lounges. He will develop new, innovative menu concepts; lead the resort’s culinary team members across food and beverage, Atlantis’ convention center and events and banquets areas; and further solidify Atlantis Paradise Island as a leader in culinary excellence.

Chef Orreal, a certified Master Chef, brings 20 years of executive experience in the culinary and hospitality industries to his position at Atlantis Paradise Island. Notably, Orreal opened the Shanghai Disney Resort and served eight years as director of culinary where he led a team of more than 1,000 staff members to produce approximately 11 million meals per year.

Orreal also spent five years as an Executive Chef at Resorts World Sentosa, an integrated resort in Singapore. He played a pivotal role in developing the resort’s 45 unique food and beverage concepts. His experience also includes three years as the executive sous chef at SATS, the main meal provider to Singapore Airlines.

“Throughout his career, Alan has consistently displayed operational leadership as well as expertise in crafting bold and one-of-a-kind concepts and menus at a variety of restaurants and dining outlets,” says Audrey Oswell, president and managing director Atlantis Paradise Island. “With these leadership skills and his experience at large-scale resorts, Alan is the ideal professional to build upon and heighten our already extensive culinary offerings at Atlantis.”

Originally from Australia, Chef Orreal spent most of his career in Asia at a variety of hotels, resorts, and five-star restaurants across Singapore, Taiwan, Hong Kong, Japan, Sri Lanka, and China. His global experience has led him to develop a very unique style of modern international cuisine. His dishes have been described as borderless and dynamic, fusing authentic international recipes with the most contemporary gourmet trends.

“I am very honored to be able to work alongside so many incredible industry leaders and join the impressive team at Atlantis Paradise Island,” says Orreal. “The resort’s culinary offerings are unrivaled, and I look forward to furthering the resort’s success to new levels.”

Chef Orreal’s diverse career has also led him to be well-known for his role as host and judge on the award-winning television series, The Big Break, a reality show which inspires underprivileged teens by teaching them the art of cooking. An advocate for apprenticeships, Chef Orreal frequently serves as a guest lecturer at food schools across Asia and was named an Honorary Distinguished Professor by the All Japan Chefs Association. Chef Orreal also holds the Worldchefs Presidents Medal and is the Chairman of the Young Chefs Development Committee for Worldchefs, which is a global network of chefs societies. Alan had also represented China (2016 & 2020) and Japan (2008) at the Culinary Olympics in Germany.

Atlantis Paradise Island is a lush, oceanside resort located on Paradise Island in The Bahamas. A dynamic destination that launched over 25 years ago as a first-of-its-kind modern marvel of nature and engineering, Atlantis is tied to a meaningful connection with the ocean, Bahamian culture, and the spirit of its beloved team members. The resort’s new, immersive programming connects guests to the rich history, art, people, food, and festivities of The Bahamas.