The subpar year that tradeshows experienced in 2010 is quickly becoming an unpleasant memory, rather than a prolonged reality. The 2011 version of many conventions are showing increased numbers at almost every point along the show cycle. 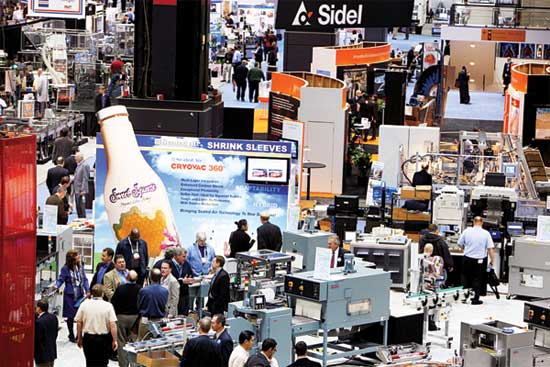 PACK EXPO is outpacing the 2009 show in every category.

More attendees, more exhibitors and more net square footage sold are a show manager’s dream, and whether the final numbers are in or preliminary figures are being tallied, improvements in these three categories are the holy trinity for tradeshow success. That being the case, many show managers are resting a lot easier in 2011 than they did in 2010.

As the first half of the year enters the books, it appears that the 2011 version of many expos couldn’t have come soon enough for attendees and exhibitors who might have stayed away or bought smaller spaces in 2010.

No matter the size or the location, tradeshows in 2011 are eclipsing their 2010 counterparts.

PACK EXPO Las Vegas 2011 is breaking records and expanding to deliver the largest packaging and processing tradeshow experience in North America this year. The tradeshow, produced by PMMI, will be at the Las Vegas Convention Center September 26–28, 2011.

With two months left before the show floor opens, PACK EXPO is outpacing the 2009 show in every category. More than 1,600 exhibitors will be on site, and exhibit space has grown to more than 600,000 square feet.

Special exhibit pavilions, including The Brand Zone, The Processing Zone, The Pharmaceutical Pavilion and The Reusable Packaging Pavilion, are sold out and jam-packed with exhibits.

“We’re excited about the way PACK EXPO Las Vegas 2011 is shaping up,” said Charles D. Yuska, PMMI president and CEO. “The Las Vegas show has grown considerably over the past 15-plus years, and now it has more to offer than ever.”

Moving from big to small is proof that the tradeshow industry is regaining its health. Scientists who study the spread of insects and pathogens through global commercial trade are also joining the convention trail in record numbers.

More than 1,800 scientists from around the world will gather at the 2011 American Phytopathological Society (APS)-International Plant Protection Congress (IPPC) Joint Meeting from August 6-10, 2011, at the Hawai‘i Convention Center.

Show organizers are anticipating a record international attendance, including delegates from 55 countries. The meeting is expected to draw 1,800 attendees, which tops initial estimates by more than 600 participants.

“We are so pleased to have our annual meeting in Hawai‘i – a place with such natural diversity and exotic plant life,” said John Sherwood, president of APS. “Hawai‘i offers a central location for a meeting focused on global issues and easy access for new attendees from the Pacific Rim and Asian countries.”

Heading farther away from the mainland, Messe Berlin, organizers of ITB Asia, The Trade Show for the Asian Travel Market, has announced that all available booth space for this year’s show is completely sold out four months before the door opens in Singapore in October.

Many exhibitors have also taken advantage of a new two-year contract scheme to snap up 14 percent of the prime booth space in 2012.

“Asia Pacific is the fastest-growing travel market in the world and with close to 800 exhibiting companies from 60 countries participating, it is clear that ITB Asia is a must-attend event for companies looking to establish a strong presence here,” said Nino Gruettke, executive director of ITB Asia. “The exceptional sales performance demonstrates the show’s growing importance and is a validation from our peers that ITB Asia is indeed an effective and critical platform for marketing, networking and learning all about the Asian travel market.”

All available booth space for this year’s IBT Asia is completely sold out.

Twenty percent of returning exhibitors have also bolstered their presence at the show by increasing booth space.

Staying in the Pacific Rim, booths at Global Sources’ electronics tradeshow, scheduled to run October 12-15, 2011, at the AsiaWorld-Expo in Hong Kong, have also already been sold out.

“Our electronics shows continue to attract the world’s top buyers, and this is driving demand for exhibitor space at our shows,” said Tommy Wong, president of Global Sources Exhibitions. “This year, we sold out all booths two months ahead of the show, which is earlier than any of our previous fall electronics events.”

“Buyer participation at our electronics shows is in a vigorous upturn,” said Wong. “Attendance at the spring 2011 show reached 33,549 buyers, up 18.7 percent. This increase is the result of a strengthening global economy.”

Returning back to the states, the 17th Annual Las Vegas Antique Jewelry & Watch Show, which took place at The Paris Hotel Las Vegas from June 2-5, 2011, reported the highest attendance ever, with a 38 percent increase over last year’s event.

“Opening day attendance was strong. As the days passed, vibrant sales continued,” said Andrea Canady, fair director. “We are happy to report that we surpassed last year’s numbers by a wide margin.”

Heavy attendee traffic, lots of new contacts and sales were reported by a wide array of successful dealers as well.

“We had a terrific Las Vegas show,” said Jeff Cohen from N Green & Sons in Chicago. “There are definitely signs of an increase in business as many retail stores that we deal with were buying, and buying with great confidence. We sold a lot of merchandise in many categories from many price points including antique jewelry ranging from $100 to $1000, to a stunning Art Deco Diamond Necklace for $80,000 and a rare Patek Philippe Chronograph 1940s watch for $45,000.”

Also in Las Vegas, the 30th anniversary of Interbike surpassed last year’s show in overall size with 30 business days left before attendees even ride into town.

The 2011 total number of scheduled exhibitors is 750, representing more than 1,200 brands, up from 730 exhibitors last year. Included in that number are 198 new companies either exhibiting for the first time or returning to the show after a hiatus.

“Interbike 2011 is already shaping up to be one of our biggest shows ever,” said Andy Tompkins, show director. “The mix of established brands that exhibit every year and companies new to the cycling industry or just new to the show provide retailers with the opportunity to see the latest offerings from every corner of the cycling world, something that can only happen at an event as broad based and well-attended as Interbike.”

With companies continuing to sign up to exhibit, Interbike is currently at more than 300,000 sold square-feet, which already represents an increase compared to last year’s final show size of 295,000.

Approximately 25,000 retailers, exhibitors and media attended the event, which sold more than 456,000 square feet. This number represents the highest net-sold square feet ever for Summer Market.

“The energy at this show was tremendous, and it rebooted everything for me as I head back to my store,” said Shelley O’Neill, store manager at Tooth of Time Traders. “Talking with the manufacturers I work with, their business results are up. Our sales are up. People are excited.”

From China to Utah and jewelry to insects, professionals in the tradeshow industry should also be excited, as the industry starts to bid a fond farewell to the dismal numbers of 2010.