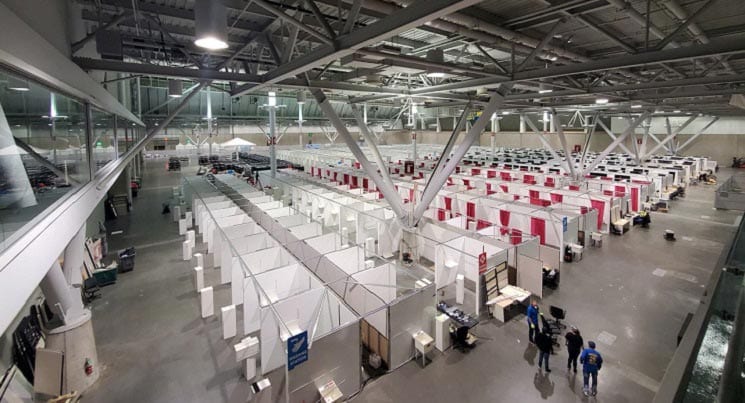 (Pictured above: Boston’s convention center became a field hospital during the crisis, just as many others did)

The word “catastrophic” hardly begins to describe the impact that COVID-19 is having on the face-to-face marketing industry as events around the globe are canceled or postponed by the tens of thousands. It is an economic freefall that few could have anticipated and that no one has seen in their lifetime, and to call the situation dire for tradeshows, meetings and events would be a monstrous understatement. However, leaders from across the industry are banding together to light a torch that they believe will lead face-to-face marketing through the dark time, working along the way to improve the industry so that it emerges smarter and stronger than it was before the coronavirus crisis began.

Any such collaboration is an act of extreme expediency in a situation that completely blindsided industry leaders. To wit, in March, organizations such as the International Association of Exhibitions and Events (IAEE), the Center for Exhibition Industry Research (CEIR) and UFI, the Global Association of the Exhibition Industry, were trying to keep a running list of shows that were canceled or postponed. By the end of the month, they all gave up because the trickle of notices became a tidal wave. At a certain point, says David DuBois, president and CEO of IAEE, they realized it was just impossible to keep track and it would be easier to count the events that hadn’t canceled than those that had.

Still, optimism has been abundant, with numerous shows rescheduling for late summer and fall and economists predicting the exhibition and event industry would fully rebound by 2021. That was weeks ago, however, and based on how quickly the situation between mid-March and mid-April deteriorated, there is no way to anticipate right now what the coming months will hold.

It started as a relatively small blip on organizers’ radar and one that was expected to be confined in its impact. As of March 15, CEIR had received just 50 cancellation notices from business-to-business (B2B) events, many of them significantly sized. It was a working figure, though researchers noted it was likely not representative of many smaller events canceled that had not been brought to the organization’s attention. But calculating the loss to the economy from only those 50 shows provided a bleak outlook as analysts said that, taking all exhibitor and attendee spending into account, the overall loss to the economy was approximately $1.8 billion.

Of the 9,400 or so B2B annual exhibitions that CEIR tracks, around 2,500 of them take place between March 1 and May 15, CEIR says. It postulated that up to 80 percent of those shows might cancel, bringing the economic impact to $22 billion. But with the national stay-at-home initiative put forth on March 17, it became increasingly unlikely that even 20 percent of those events were able to take place, and that is to say nothing of the thousands more scheduled in the near future. The reality is that even the most skilled analysts are paralyzed by uncertainty because it is the whim of the virus and little else that will control when the economy can begin to rebound.

Allan Shaw, Ph.D., chief economist for Global Economic Consulting Associates Inc. and an analyst for CEIR, says that a recession is a certainty at this time, but the speed at which the country will recover is difficult to predict until the spread of COVID-19 is under control. On the bright side, Shaw believes that more than half of the current recession will be resolved simply with the reopening of the nation’s economy. “Even though economic indicators are as bad if not worse than those of the Great Depression, the underlying economic fundamentals and causes are different,” Shaw says. “The recession we are experiencing now is caused by a supply shock. By comparison, it was a shock in demand that triggered the Great Depression in the 1930s and the Great Recession of 2008. Supply shocks today include the economic lockdown due to stay-at-home orders, supply-chain disruptions, lower productivity of working staff and mortality.”

If monetary and fiscal policies are in place and injecting money in the system, thereby pushing up demand for goods and services, Shaw predicts a V-shape recovery, meaning one that recovers as quickly as it declined.

In the meantime, a study conducted by CEIR finds that many firms are fastening their proverbial seatbelts and trying to sustain themselves through these challenging months. Of the 164 executives who responded, 16 percent say they have cut pay in their organization, though the number is much higher (29 percent) when just factoring independent show organizers, while 16 percent of independent organizers have furloughed staff compared to 8 percent among respondents on the whole.  The average pay cut, CEIR says, is 25 percent. To weather a downturn in income, 86 percent say they are working aggressively to revise their budgets. Of those planning events, 41 percent say they postponed them, with the majority of them scheduled to be held between August and November of 2020. Of the postponed events, 34 percent were pushed off to 2021.

“Many hard lessons have been learned from this health crisis that has blindsided the world,” CEIR said in a statement. “It is motivating executives to consider options to pivot to alternative event content or models if a physical event is unable to take place in the future due to an unexpected calamity.” Virtual events are gaining new life, the research found, as organizers begin experimenting with virtual options that may fully or partly replace a face-to-face event if necessary.

But the real goal, says DuBois, is to help the exhibition and event industry back to its feet just as soon as possible. “While 69 percent of show organizers say they are doing some level of virtual, we need to keep doing some version of face-to-face marketing,” DuBois says.

If there can even be such a thing, Dubois says, one positive offshoot of the pandemic is the way in which it has brought players from all corners of the industry together to collaborate on initiatives aimed at supporting the survival and improvement of face-to-face marketing.

Chief among those activities is a grass-roots consortium recently unveiled called Go Live Together (golivetogether.com), an effort already backed by 500 companies the first week it launched. “It has a robust focus on four or five areas where there are very positive initiatives and programs going on,” DuBois says. In addition to the hundreds of companies adding their weight to the cause, so too has every major association serving exhibitions and events, DuBois says, and the collaboration is championing a multipronged approach to advocating for the industry.

According to an inaugural Go Live Together press release, the group was pulled together by industry titan Freeman, which formed a coalition of 80 founding partners to begin building the framework for the initiative. “While our concern is first and foremost supporting the suppression and mitigation efforts around COVID-19, live events will be an integral part of accelerating the U.S. and global economic recovery,” says Bob Priest-Heck, CEO of Freeman. “A fundamental aspect of the industry is that tradeshows and events enable companies to grow, educate and innovate. Protecting the industry means protecting key economic and social drivers that not only impact jobs today, but also the development of the next generation of businesses.”

On its website, Go Live Together provides access to an enormous array of resources for anyone working in the industry, from research to sanitization protocols to legislative advocacy. It has helpful guides for those planning to pivot from a live event to a virtual event, it has press release templates and crisis communication plans, and it has infographics that will help partners share the staggering impact that live events have on the financial health of the United States.

The website says that live events contribute nearly $1 trillion to the U.S. economy each year via every sector that makes up the gross domestic product. They directly or indirectly impact 6.6 million jobs and pump $117 billion into federal, state and local taxes. And more than 80 percent of the companies serving the live events industry are small businesses.

“It’s indisputable that live events have significant, quantifiable economic impact,” says Priest-Heck. “But they also provide the intangible. These events allow brands to connect directly with their audiences in a meaningful way and the experiences leave a lasting impression that cannot be replicated.”

In order to add volume to the voice it brings to the table, Go Live Together is asking industry partners of every kind to provide feedback detailing the impact that the pandemic is having on them. That data will arm the organization when it comes time to fight for support for the industry—support which in part is already outlined in a draft Trade Show & Event Recovery Act put forth by Trade Show Executive. That piece of proposed legislation includes provisions such as:

The cohort at Go Live Together is drafting additional legislative components as well, including an ask for funds that offset the cost to host an exhibition and incentivize people to attend them post-pandemic. The final legislative proposal will be posted to the website when it is completed, leaders say.

Another major initiative underway, says DuBois, is the creation of a LEED-style certification system for sanitization, something that—OSHA’s generic cleanliness rules asideؙ—has never specifically existed before now. The initiative is the brainchild of the Global Bio-Risk Advisory Council (GBAC), a subsidiary of the International Sanitation and Supply Association (ISSA). That organization has formed a task force with leaders from the exhibition and event industry to devise guidelines for the best practices, standard operating procedures and standards for the sanitation and safety in convention centers. GBAC is simultaneously working with airports, airlines, and hotels on similar protocols, says DuBois, because the world is going to need a new way forward when it comes to sanitization.

According to DuBois, GBAC scientists are plumbing the knowledge of exhibition professionals to understand the movements and methods of a show floor, from the loading docks to food service to shuttle buses, in order to draft a best-practices system for sanitization. The group of 25 people is working at a feverish pace, says DuBois, because there is a sense of urgency to have something in place before venues start reopening, and they expect to unveil the complete certification system in the coming weeks.

Though details are still being ironed out, essentially the program will include an online course that venue staff can take followed by some form of verification that standards are being implemented. Once staff members take the course, the venue will need to complete a thorough process in order to achieve certification status and receive a certification seal they can place on their promotional materials.  “What it means is when you get invited to a show or conference and you see on the convention center’s website that they have a seal, it tells you that it’s a place that is going to be safer than others,” DuBois says. “Wouldn’t it be great if people could take a two and a half hour class and make me safer? People want to be able to leave their houses again.”

But even though he would like nothing more than to see the exhibition and event industry reopen and flourish, DuBois believes now is too soon. One show braved the elements and continued as planned in mid-April, he says, which caused an even deeper government shut down in that area. Bucking science to get back to the show floor will only hurt the industry more in the long run, DuBois believes. “We need to listen to scientists,” he says. “It’s ridiculous the speed at which they are trying to reopen some places. My advice as a non-medical business man is listen to the professionals. We want to be able to say the tradeshow industry is safe and open, and that will be when the scientists say it can be.”