What’s the difference between the GC and EAC? Both general contractors and exhibitor-appointed contractors hire from a region’s local labor pool. The companies assign forepersons and lead-persons, and the unions assign stewards for the contractors. Although they are similar, there are distinct differences between the two types of suppliers. Here is a deeper look at their roles and responsibilities, including factors exhibitors should consider.

General Contractor
A general contractor (GC) is hired by the tradeshow organizing association and is responsible for the physical set-up of the tradeshow. General contractors coordinate most of the labor and work required for decorating and coordinating a tradeshow event throughout the facility, such as rigging signs, laying aisle and registration carpet, installing A/V, material handling, applying aisle signs and larger facility graphics, moving furniture and equipment as well as providing services for exhibitors on the show floor. In the U.S. some of the GCs include Arata Expositions Inc., Freeman, George Fern Exposition and Event Services, GES, and Arata Expositions Inc., Teamwork Inc. and George Fern Exposition and Event Services. 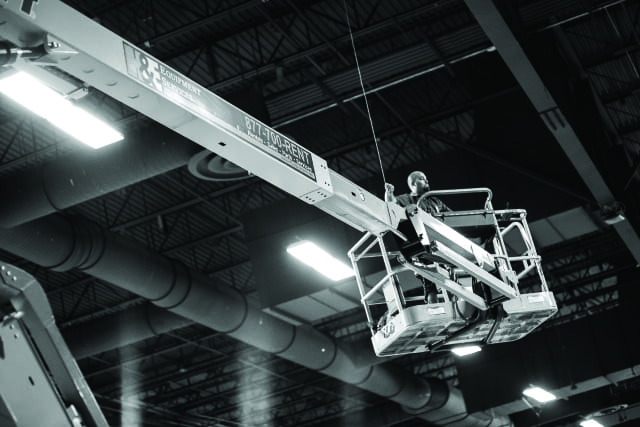 For the exhibitor, the GC is a convenient option because they can arrange for labor services directly through show management. If an exhibitor chooses to work with an EAC, there are additional steps required, such as EAC approval by show management (sometimes up to 90 days prior to move-in). Also, the GC’s labor crews and equipment are available as soon as you need it, which helps prevent idle time while the clock is ticking. While larger EACs may also have workers and tools on standby, smaller or mid-sized firms may not.

Traditionally, the GC also discounts its labor up to 10 percent less than the some EACs. Having earned a signed contract from show management for overall show setup, the GC has secured a considerable amount of money without the business from individual exhibitors. And in the agreement, the GC also reserves the rights to specific jobs and equipment use, such as any sign rigging, use of a forklift, installing electricity and other safety-related tasks. Plus, GCs usually do not have employee-related costs such as benefits packages.

As the saying goes, however, “You get what you pay for.” With a work crew stretched across the entire tradeshow, the GC labor is not specialized in exhibit I&D. A crew member who installs one exhibit may receive an entirely different work order upon completion, such as applying graphics to an escalator. Thus, they have less experience installing exhibits than the EAC, which sometimes results in errors or slower service. Also, the crew who installs an exhibit may not be the same crew who dismantles it, increasing the risk for inefficiencies and mistakes.

Nonetheless, exhibitors with a substantial exhibit that requires a large crew with extensive rigging and forklift use may find that GCs are the most efficient and cost-effective option. In such cases, the GC gives them priority and makes readily available the required equipment and personnel, whereas an EAC labor crew is often forced to wait for the GC to make the same team available.

Exhibitor-Appointed Contractor (EAC)
An exhibitor-appointed contractor (“EAC”) is hired by the exhibitor, and its services are limited to the installation and dismantle of exhibits on the show floor. Unlike the GC, they do not service the contractual needs of the associations and show managers. EAC companies include Eagle Management, Momentum Management, and TS Crew and Willwork Inc.

The EAC business grew out of the need and demand from exhibitors for more personalized, quality and accountable labor service. The EAC will usually provide the exhibitor with a lead person and their direct phone number. They often act like a conductor in an orchestra, ensuring the different players are in sync and coordinating the moving pieces to create a show-ready tradeshow exhibit. 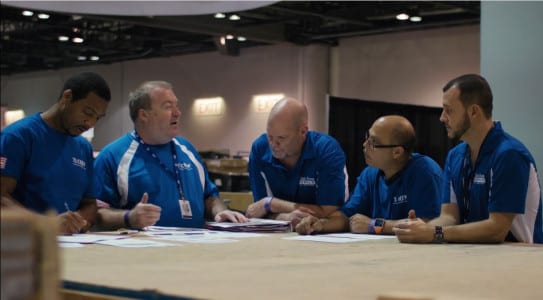 The EAC labor crew is also usually more skilled in installing and dismantling exhibits because the EAC provides steady work and training for their crew members. Thus, the labor crew may be familiar with specific exhibit systems, such as Octanorm or NimlokTriga USA, and are able to work more quickly and with greater care. The EAC often assigns the same crew for both installation and dismantle, further ensuring efficiency, accuracy and accountability.

However, in their contractual agreement, the GC and show management guarantee work for the GC, and the exhibitor usually has to hire the GC for specific jobs and equipment use.

There are also different rules, restrictions and fees for hiring EACs that vary by state, city and even venues within the same city, that make the EAC a less convenient option. One extra step includes registering the EAC, sometimes up to 90 days before the move-in. Sometimes, there are fees associated with hiring an EAC, which are passed on to the exhibitor. In 2014, Hanley Wood, the show management for the CONSTRUCT show held at the Baltimore Convention Center, charged a $200 fee to each exhibitor who hired an EAC.

Every exhibitor and their team should check the tradeshow’s rules and regulations months in advance so that they are aware and can plan ahead. Each part of this series will dive deeper into exploring I&D.

What is a right-to-work state?
A “right-to-work” law is a statute in the U.S. that prohibits union security agreements, or agreements between labor unions and employers, that govern the extent to which an established union can require employees’ membership, payment of union dues or fees as a condition of employment, either before or after hiring. Right-to-work laws do not aim to provide general guarantee of employment to people seeking work, but rather are a government regulation of the contractual agreements between employers and labor unions that prevents them from excluding non-union workers or requiring employees to pay a fee to unions that have negotiated the labor contract all the employees work under.