HCN brings the convention to the hotel room 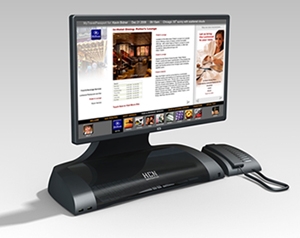 The Navigator screens are active in the rooms for 16 hours per day.

HCN’s technology is the first interactive cross-platform information network that interconnects multiple hotels in one city, creating a city-wide network for use by the convention community. HCN gives convention managers the ability to create an informative real-time online community that’s available to all attendees across the convention city.

“Installing HCN is going to be a huge win; this is potentially the most important in-room and convention innovation in the last several decades,” said Kevin Bidner, president and CEO of HCN.

HCN’s first installations at the Hilton Chicago (1550 rooms since August 2010) and the InterContinental Hotel Chicago (800 rooms since January 2011) have gone well. More than 65 percent of the guests at the Hilton have used the technology and an overwhelming majority of them (85 percent) said they would prefer to stay in a hotel room with it.

“Once we go live with multiple hotels in the same city, this becomes a city-wide communication network, allowing the convention to directly reach attendees in their room with instant information,” said Bidner.

The convention goers can access information in three different ways: in their hotel room using HCN’s touch screen Navigator device, via their in-room TV, and via the guests’ own laptop computer and mobile device.

The Navigator device is the technology developed by HCN. The unit combines a 22-inch touch screen with a keyboard, mouse and an integrated telephone. It has built-in web browsers, speaker-telephony capabilities and a suite of business applications.

The Navigator screens are active in the rooms for 16 hours per day, creating in-room digital signage for use by the hotel or convention managers who can use the system to contact the guests directly with messaging, or promote their venue or event.

This very same network is also provided through a web-based portal that the guest can use through their own laptop or mobile device, allowing the network to be accessed in rooms where HCN’s hardware is not installed, and making it easy for any guest to connect to the network from wherever they are.

Messages and key information can be targeted at a single attendee, a limited group, or the entire group of meeting attendees.

“If there is a pressing professional issue, important news, an election or a policy matter that is being debated at the convention, the Navigator may be an ideal way to post personalized messages, access a real-time convention-only blog, or present a videotaped panel discussion so that all attendees are better informed,” said Brinn.

In addition, convention planners can leverage the HCN platform to enhance their sponsorship programs and create a lucrative revenue opportunity that could cover the cost of broadcasting and contribute to the event’s bottom line.

“For the first time I can directly reach every guest in every room with instant personal communication, with the ability to customize Hotel service offerings, including our room service menu,” said John Wells, general manager of the Hilton Chicago. “Customers today want information that is current, fast and accessible. With the Navigator in all of my guest rooms, I have increased guest satisfaction and have a competitive advantage in my marketplace.”

The Navigator also provides guests with a fully-catalogued directory of what’s available to them in their local area, all provided by the local convention and tourism bureau: Restaurants, nightclubs, sports and cultural events, museums and galleries, theater and movies, shopping, tours and so on. Guests can actually purchase tickets, make restaurant reservations, purchase in-room entertainment, book a sightseeing tour, rent a car, and even print out their return trip airline boarding passes, all with the touch screen.

HCN has upwardly scaled its operations to accommodate an anticipated demand from the convention industry. During the past two years, HCN has built a growing number of relationships with hoteliers and convention and tourism bureaus in major convention markets. As they learn of HCN’s success in the Chicago market, these industry leaders are increasingly excited about the opportunity that this technology brings to their efforts to leapfrog their convention and tourism services into the 21st century.

“We now live in an Internet and technology-centric world, with nearly 100 percent adoption of self-serve computing in one form or another. The Navigator seamlessly brings now established trend to the hotel room,” said Bidner. “It’s an absolutely natural addition to the hotel’s technology. HCN brings guests’ day-to-day interactive universe into the hotel room with an easy to use and fun technology implementation.”