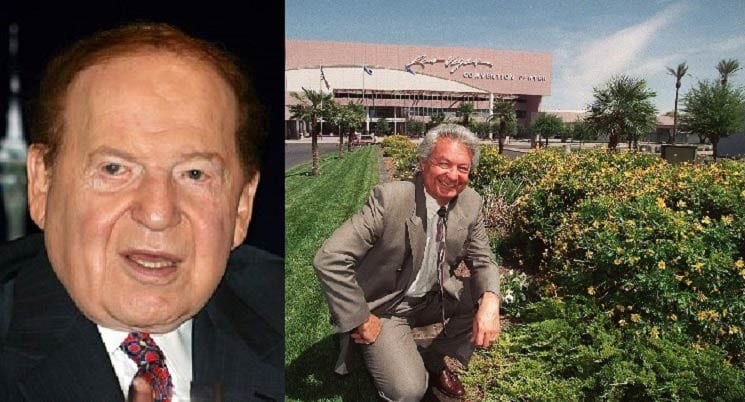 LVCC to be Renamed the Adelson/Cortez Center

(Pictured L-R: Sheldon Adelson and the late Manny Cortez in front of the soon-to-be-renamed Adelson/Cortez Center)

The Las Vegas Convention Center is being renamed the Adelson/Cortez Center to honor both Sheldon Adelson, founder, chairman and CEO of the Las Vegas Sands Corporation, and Manny Cortez, four-time Clark County Commissioner and 13-years as the head of the LVCVA.

By naming the world class facility after a Hispanic American and a Jewish American the LVCVA board is sending a strong signal that they are investing heavily in diversity. “The diversity that the A/C Center in Las Vegas represents is synonymous with both the diversity of all groups that use the facility as well as the diversity of the ever-growing southern Nevada population,” says an unnamed source. Some may speculate that this name change comes swiftly on the heels of some long, drawn-out negative press regarding thousands of dollars in Southwest Airline vouchers. The blight on the Authority’s record include a search warrant and arrest at the convention center offices following the departure of LVCVA CEO Rossi.

The renaming of the center to bear the two names that are synonymous with growing Las Vegas into the world class destination and brand that it is today is not without many bumps over the years. Back in the ‘90s and following decade Adelson’s Sands and the LVCC fought in the press often. Adelson’s organization, run by then-son-in-law Rich Heller, complained of the inequality of taxation for his private venue compared with that of the LVCVA, a quasi-governmental agency, not paying any taxes. Additionally, they argued, that they were funding an agency to promote the facilities of their competitors. From the LVCVA perspective, their charter is to promote Las Vegas as a destination which provides  benefit for all organizations working in southern Nevada’s giant tourism economy.

The new name will take effect in August 2019, the same month Adelson will celebrate his 86th birthday.  At time of press it was uncertain if Adelson will be present at the naming ceremony.

Adelson, an American business magnate, investor, and philanthropist, was born August 4, 1933 into a low-income family and grew up in Boston. His Sands Corporation owns the Marina Bay Sands in Singapore, and is the parent company of Venetian Macao Limited, which operates The Venetian Resort Hotel Casino and the Sands Expo and Convention Center. As of October 2018, Adelson was listed by Forbes as having a fortune of $33.3 billion, making him the 15th-richest person in the world. According to Exhibit City News Publisher Don Svehla, “He not only revolutionized the tradeshow and meetings industry in Las Vegas, he also took the revolution worldwide.” A key moment in the chain of events leading up to present day was his sale of COMDEX, a powerhouse whose flagship Las Vegas annual event drew upwards of 170,000 attendees at its peak, as well as being the most important event in the then-red-hot tech world. Adelson sold COMDEX to Japan’s Softbank Corp in 1999 for $860 million.

Cortez retired from the LVCVA in 2004 and was 67 years old when he passed away in 2006. Flags flew at half-staff in front of the LVCC, where he worked for more than 20 years, 13 as president. He presided over two decades of continuous rapid growth of convention centers in cities nationwide. The race to build bigger and better convention centers (and attract lucrative tradeshows and events) was an exciting period—the likes of which may  never be replicated in American trade history. Many say Cortez helped to make Las Vegas the tourist destination that it is today. It was under Cortez’s leadership that the famous slogan “What happens here, stays here” was launched. Cortez is also credited with getting tourism back up on its feet after the events of 9-11. In August 1998, Manuel J. Cortez Elementary School in Las Vegas was named in his honor. Cortez and his family came to Las Vegas from Las Cruces, N.M., in 1944 when he was five years old.

The Las Vegas Convention Center started operations in 1959 with 80,000 square feet. When the nearly $1.5 billion expansion and renovation is complete in 2025, the renamed A/C Center in Las Vegas campus will boast more than two million square feet and retain its position as the largest and busiest-mega-convention-center-complex in North America. R&R Partners, the Authority’s agency of record, is in the early stages of a total rebranding to coincide with the reopening in 2022 of the fully remodeled and upgraded main campus. Some of the early contenders for a new motto include, “The Adelson/Cortez Center of Las Vegas…it’s great to have AC in the desert!”