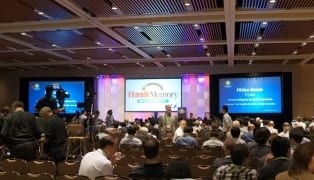 The Flash Memory Summit recently announced that as part of the 2016 Summit there will be a Media & Entertainment Day on August 9 with a special series of panel discussions on the latest trends in video capture, production and storage requirements. Celebrating its 10th anniversary, FMS 2016 is being held August 9-11 at the Santa Clara Convention Center.

The M&E Day sessions bring together leading filmmakers, digital storage/solution providers and media/entertainment experts focused on providing attendees with an increased understanding of the growing industry-wide demand for higher-resolution education and entertainment video content, the increased frame rates required and the impact on storage.

“This year, filmmakers will produce more than 10,000 feature-length films and at least five times that number of documentary and educational/informational videos,” noted Tom Coughlin, conference chairperson. “Nearly all will be produced in 4K resolution and increasingly, in higher frame rates and HDR (high dynamic range) which requires more than 7 TB/hour of storage capacity.  In addition, VR (virtual reality) video capture and production has increased more than 80 percent this past year, which can require many times more storage than 4K video content.

“The media industry is being very innovative in how they are using storage and are placing increasing requirements on the storage industry,” the president of Coughlin Associates added. “Whether people view the content at the theater, on their TV, or on their mobile device, more than 95 percent of the content is shot digitally and requires high-speed, high-performance and rugged flash-memory based storage solutions.”

Available at no additional cost, the sessions are open to individuals and organizations interested in understanding the complete M&E industry content cycle.

There will be four panel sessions throughout the day:

The Flash Memory Summit 2016 also showcases the latest in flash memory design, production and application with over 10 simultaneous panel session tracks and 14 keynote speakers from industry leaders around the globe.