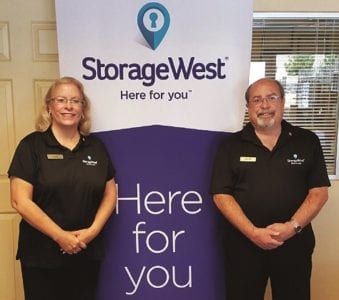 Everyone knows Kevin and Laura Fairchild of Storage West (photo at right). No, really. And if you don’t, you should. In fact, odds are you’ve scribbled a note or two on one of the many Storage West notepads they’ve given away to customers, both potential and loyal, over the years. Everyone loves notepads. And everyone loves the Fairchilds.

Their energy is remarkable and their enthusiasm contagious. They’ve been happily married to each other for 37 years, while, professionally, they’ve been successfully married to Storage West  in Las Vegas for 11 years.

“When we started in storage eleven years ago, it wasn’t that big of an industry,” says Kevin.

“There were only six stores in Las Vegas, now there are 13,” adds Laura, completing his thought, as spouses often will.

Coincidentally, about the same time they got married, Storage West began to grow from its early days in the late 70s to a powerhouse southwestern storage company, whose reach encompasses 52 locations in four states: Arizona, California, Nevada and Texas.

And now, in a well-deserved promotion, the Fairchild’s are spearheading Storage West’s community relations campaign to get the word out to those uninformed entities that have yet to discover the quality, value and real customer service afforded by Storage West and their facilities.

“What we are doing now is proving how networking actually works, by getting our name out there, getting involved and doing community service and that type of thing,” says Kevin. “We’ve met all the politicians, we’ve met the governor and we’ve met all the senators and congressmen. Everyone knows Kevin and Laura from Storage West.”

“But it’s not just networking. We volunteer our time and give back,” says Laura, citing a recently held food drive.

“Storage West believes in the community,” finishes Kevin. And that’s why the company motto is “Here for You,” and why they belong to more chambers of commerce, registers, clubs and business groups than you can shake a stick at. Needless to say, just about every mover and shaker at every one of those meetings knows the stalwart Fairchilds.

“Right now, we’re strictly concentrating on Vegas,” continues Laura, “working with (Director of Sales and Marketing) Don Willis to try and figure out exactly how we’re going to do the other three states. Right now they have people who are doing what we used to do. Eventually he wants to get a person in each one of the districts to do what we do.”

Willis knows the goldmine that he has in the Fairchilds. “They, more than any couple I’ve ever met,” he says, “when I ask them what is their bliss in life, their response without hesitation is networking. They love to network and that’s why I’m so excited that they can spend so much time focusing on networking in the Las Vegas area, because it is truly their bliss.”

“And I love the fact that I can exploit the daylights out of them!” he adds with a laugh.

Speaking of exploitation, when it comes to Sin City, Storage West is the only storage company recognized by the Las Vegas Convention and Visitors Authority and the only one listed on their website. One reason for that is Storage West will receive its clients’ packages and deliveries for free just for renting with them. So if you’re an out-of-state convention exhibitor, you can save a lot of money by having your shipments sent directly to a storage unit as opposed to onsite at a convention center. And for locals, they also sell moving supplies and they’ve even got a free moving truck.

“The Eastern store and the Flamingo store get most of the convention business here because they’re closer to the Las Vegas Convention Center,” says Kevin.

One thing is for sure, the Fairchilds are a team – you won’t see one without the other. To know them is to love them, and that’s what makes them the perfect ambassadors for Storage West.