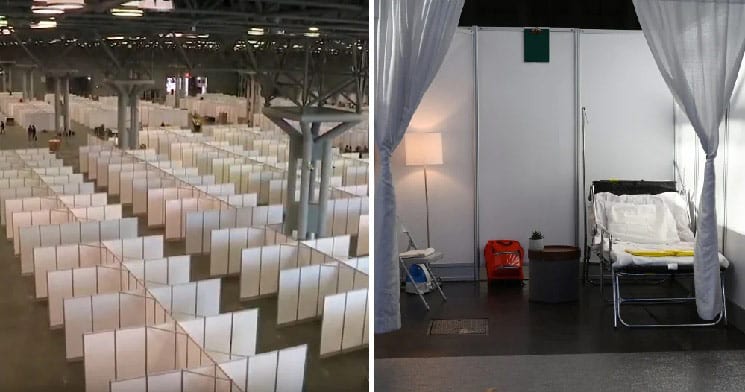 On the Front Lines of COVID-19: CCs Transforming into Temporary Hospitals to Battle Coronavirus

Of all the words associated with the tradeshow and convention industry, community is right at the top. An intimate network of emotional connections, families and peers, the tradeshow world is a small, tight-knit group of friendly competitors who put as much work into altruism and charity as they do their bottom line. People matter more than the dollar, and as the world battles with the COVID-19 pandemic, society has begun to see the tradeshow and convention industry it at its very best. Over the coming weeks, Exhibit City News will be reporting on the stories of inspiration, courage and hope coming out of the tradeshow and event world, shining a spotlight on those unsung heroes making a difference. The series begins by revealing how conventions centers across the nation are being transformed into temporary hospitals tasked with battling coronavirus.

As the doors close on public events, convention centers across the nation have been reopening to provide beds and workspaces to support the huge influx of patients needing care. The first to do so was the Jacob Javits Center in New York City on March 27. Where once there were double-decker booths and pop-up meeting rooms, now sit 1,000 beds and room to treat up to 2,000 patients. The conversion was undertaken by the New York District of the Army Corps of Engineers and took a week of around-the-clock working to complete.

But the transformation at Javits is just one of many centers being converted into alternate care facilities at the request of the Federal Emergency Management Agency. On March 29, the Los Angeles Convention Center was announced to be making the switch, just before TCF Center (formerly the Cobo Center) in Detroit was designated a temporary alternate care site by Governor Gretchen Whitmer, the State of Michigan and FEMA on March 30. Detroit’s TCF Center has become a 900-bed temporary care facility, the conversion includes two separate floors, to be segregated based on the severity of a patient’s illness.

From there, the convention centers undergoing transformation grew by leaps and bounds. On March 31, Seattle’s CenturyLink Field Event Center made a similar announcement, before the news broke that the New Orleans’ Ernest N. Morial Convention Center would be doubling its previous designation of 1,000. On April 1, Mass. Governor Charlie Baker revealed that the Boston Convention & Exhibit Center would be following the lead of fellow Bay State facility, DCU Center in Worcester, Mass., that had already installed 250 temporary beds. Almost concurrently, authorities in Ohio announced a three-day turnaround plan that would see the Greater Columbus Convention Center converted into a temporary hospital with up to 1,000 beds. In a shift from the trend, the San Diego Convention Center was reopened on April 1 as temporary homeless shelter. After the initial 400 people settle in, the numbers under care will increase to 1,500.

Upcoming stories in this series will feature how Acer, AGAM, Allspace, Aluvision, Astound, beMatrix, Bespoke Displays, Blueprint Studios, Classic Exhibits, Design Factory/LV, GES, Octanorm, ProGlobalEvents/ ProExhibits, Studio Displays and more have all risen to the occasion to build temporary medical facilities, masks and whatever is needed during the current crisis. If your company is going above and beyond to assist in this fight, please email us at newsdesk@exhibitcitynews.com and Amadeus at amadeusf@exhibitcitynews.com for inclusion in future stories in this series.