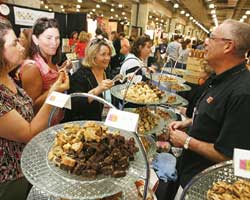 Each show is expected to attract more than 20,000 attendees, generating more than $22 million in delegate spending.

Organizers of one of the specialty food industry’s most important annual meetings have signed on for a second consecutive year in Washington, D.C.

In a significant win for the D.C. hospitality industry, the National Association for the Specialty Food Trade  (NASFT) announced that it will stage its 2012 Summer Fancy Foods Show at the Walter E. Washington Convention Center. The 2011 Summer Fancy Foods Show will also take place in D.C., as announced in 2008, leaving New York City for the first time since 1992 for its back-to-back events in nation’s capital. Each show is expected to attract more than 20,000 attendees, generating more than $22 million in delegate spending.


“This is a big deal for the DC hospitality industry. From the time we initially secured the 2011 Fancy Foods Show, our entire hospitality community has been working with the NASFT leadership to show them how we can stage a successful event here in D.C.,” said Elliott L. Ferguson, president and CEO of Destination D.C. “Their decision to sign on for another year demonstrates the strength of that partnership. It is also a testament to the way our industry is working hard and acting strategically to bring in new business.”

“We look forward to hosting one of the industry’s hottest events at our world-class facility. The District and the Center are a natural fit for this show as the city has become a foodies’ town,” said Gregory A. O’Dell, president and CEO of the Washington Convention and Sports Authority. “We are pleased that the Authority and Destination DC continue to lead the charge to get high-profile events in the building, particularly during our traditional non-peak, summer months.”

The announcement also brings a further boost to D.C.’s reputation as a booming food town. The city’s restaurant scene is profiled in the May issues of Condé Nast Traveler and Cooking Light, while several notable D.C. chefs have earned nods from the James Beard Foundation for their culinary achievements.